In pursuit of the beauty of history
The buildings of Katariina Käik  (Katariina Lane) comprise a long and narrow passageway connecting Vene and  Müürivahe streets and adjacent to the Dominican monastery, established in 1246  when the monks left Toompea to house their order here. Historians are not  certain of the originality of the present facades of the Katariina Käik  buildings. It is also uncertain whether the buildings belonged originally to  the order or were at the founding already in private hands, but the year of the  founding of the monastery dates settlement of the area to that early time. 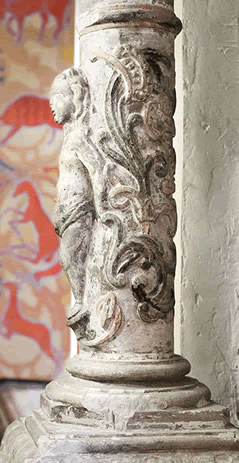 complex of buildings and land  between Vene and Müürivahe streets is listed as a whole in the city real estate  registry already in 1366, when the city of Tallinn transferred it to the  patrician Johann Hamer, thus indicating its status as a private holding.  Further mentions are of a prosaic nature, as that the rainwater from one  specified building may fall into someone else’s yard, or the location of a  specific wall and its belonging  equally  to all concerned, or that buildings may be erected against the designated wall  but without breaking through openings for windows. The eight buttresses needed  for the reinforcement of the church were built by specific agreement with a  neighboring land and courtyard owner; in recompense, the monastery promised to  reconstruct a gate from her yard to the churchyard, for as long as she owned  the property; with change in ownership, the said gate was to be immediately  bricked over. It is curious that such a powerful order needed to confer with  citizens in order to complete their buildings.

Contracts of sales, renovations,  and gifts have mentioned various attics, cellars, stone storehouses, arches,  courtyards, worked stone and wrought iron objects, all indicative of a great  number of changes having occurred over time. The present day attractiveness (or  lack thereof) of the buildings if thus often the result of partial or complete  renovations. The buildings date from different times and from varying  functions. The front on Vene street is from the 15th century, and includes, in  accord with the style of the time, a large diele, which was later rebuilt into  a narrower corridor, one side of which houses Kübarakoda (Hattery), the other  Ehtekoda (Jewelry Studio). The limestone flooring, the wooden wall panels, and  the ceiling beams are original. The building had, in the middle ages, a large  chimney, part of which is now discernible in the closet of Lapikoda (Patchwork). Nahakoda (Fine Leatherwork) and Tekstiilistudio (Textile Studio) occupy former storehouses that have undergone relatively little renovation but have  seen the addition of decorative elements. In 1937, in the course of renovating  the buildings to house W. Langebraun’s porcelain factory, workers discovered  the 17th century stone column, richly carved with grapevines, that now graces  the window of Tekstiilistuudio; it is reputed to be among the loveliest of the  Old Town’s columns. The next building down, housing Savikoda (Pottery Studio),  is from a later date and showcases a grand carved portal.

The Müürivahe end of the complex,  which houses Koppel ja Keerdo Klaasikoda (Glass Studio), with its massive and  distinguished buildings, is the oldest segment. 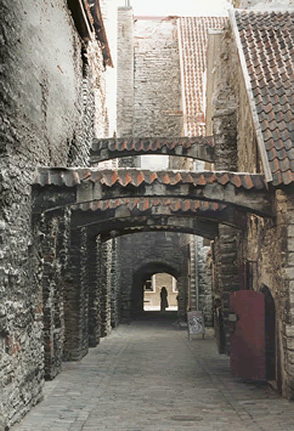 The courtyard of Katariina Käik is  among the most interesting in Old Town. All is in immaculate order and one can  stroll without hindrance from Vene street to Müürivahe.  At the middle of the 20th century, though,  the milieu was very different. The passage to Vene street was completely closed  off by a small taproom, where in the cold of winter one could even quaff warm  beer. This was a popular place where one might often spot legendary musician  Raimond Valgre, who lived nearby, or even find him jamming, seated on a keg of  beer. Instruments were always close at hand as the courtyard housed a musical  instrument repair shop.

The Müürivahe end was closed off by  a garage one of the landowners had built for himself. As there were at the time  extremely few cars, that luxury was permitted. One saw him driving very seldom,  as driving at that time was limited to very special occasions. In the courtyard  in front of the church, local workmen used to engage in spirited volleyball  during lunch breaks. As is common to backyards, this courtyard also was used  for drying laundry, while against the walls were stored wood and coal. The  ancient linden tree growing at the corner of the church was at one time the  object of a lengthy quarrel between two neighbors. One tenant felt it  restricted the light and secretly began to sprinkle salt among its old twisted  roots. The other thought that such an ancient and solitary tree in the Old Town  deserved to be preserved, and gathered up the salt. How long this dispute  lasted is not known, but the tree still stands in lonely splendor and enchants  everyone with its spring blossoming scent.

The tombstones exhibited on the  south wall of the church are from the 14th to 15th centuries and are among the  unique landmarks of Katariina Käik.

They also bear silent witness to  the beauty of history.