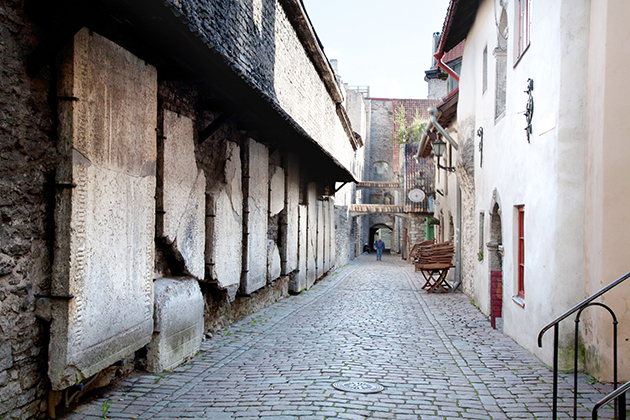 Katariina Käik (Katariina Lane)  awakened to its new life in the summer of 1995. On this short street, named for  the Katariina church which borders one side of it, there are various open  studios which function as everyday workrooms for the artists. Connecting Vene  and Müürivahe streets, the buildings form a unique medieval ensemble and as  such have affected both the layout of the studios as well as the organization  of work. Uniting the artists is Katariina Guild, unique in the annals of  historical guilds and masters. Thus is Katariina Guild a symbolic bridge  between the past and the present, integrating eight studios and fourteen women  artists. As is customary in the guild system, here also one finds both master  crafters as well as apprentices and students. 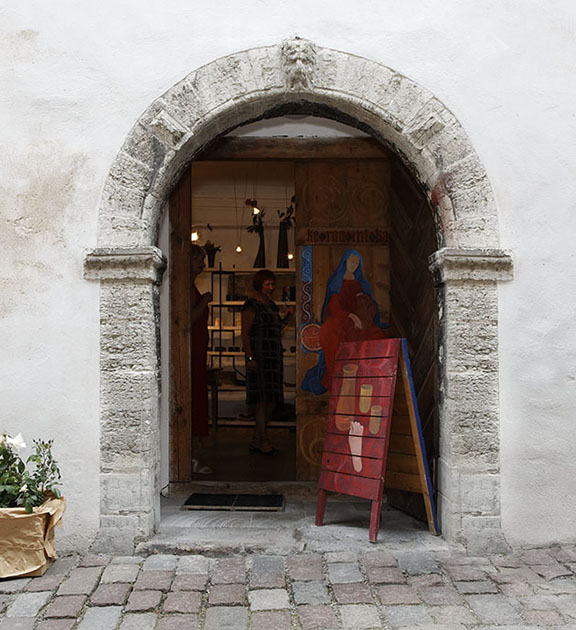 The founding of Katariina Guild was  quite special in and for its time. Prior to the opening on 21 September 1995,  we all participated in deliberations that were both inspring as well as  captivatingly unfying. We considered at length both individual and collective  relationships and possibilities, collaboratively arriving at a workable  organization that, even in the midst of a constantly changing environment,  functions well to this day. The  atypicality of our situation is what charms both those who wander through our  studios as well as ourselves. Immediacy, the authenticity of creativity, and  dedication inform all that we do and all that we create. These attributes are  as valued in the present day as they have been in the past. It is gratifying  that we have been able to bond into a large family and have even been able to  inspire others. Among these others are the Antonius Guild in Tartu and later  the Bonifacius Guild in Viljandi. Within a stone’s throw of us is the Masters’  Courtyard, where one also finds crafters’ studios as well as handicraft shops.

Katariina Guild is active in affairs of  culture and art; along with the creative process, we are also involved in  teaching and with gallery exhibitions. Though each studio has its own  character, all are united in the principle of openness. One can enjoy our  unique art not only in a gallery context but also in witnessing the everyday  processes of creation. This street, that is known as the loveliest of the Old  Town, has become a favorite for both tourists and residents. People return  again and again to enjoy the measured and deliberate pace remote from the  hustle and bustle of everyday life.

We've done everything we can to make your visit to the Katariina Gild a memorable but safe experience!

We ask every visitor to be understanding because we care deeply about the health of ourselves and our customers.
Disinfectants are available and visible on our premises.
Please keep your distance if possible.

Due to the increase in the infection rate of the coronavirus, we ask you to wear a mask or other protective gear when indoors (except for children up to 12 years of age).

If you feel sick, stay at home!

For our part, we keep ourselves informed of the requirements of the Health Board and the Government of the Republic on Covid-19 and take a responsible approach to complying with them. Our premises have adequate air ventilation. Common areas are cleaned regularly. Groups of visitors larger than 6 people are requested to coordinate in advance, either on site or by email.

With the COVID-19 safety label, trusted to us by Visit Tallinn we confirm that we follow the requirements and instructions of the Government and the Health Board of Estonia (https://kriis.ee/en) established for our industry or field, that we keep up to date with the information, and that we help visitors comply with the infection-prevention guidelines on site.